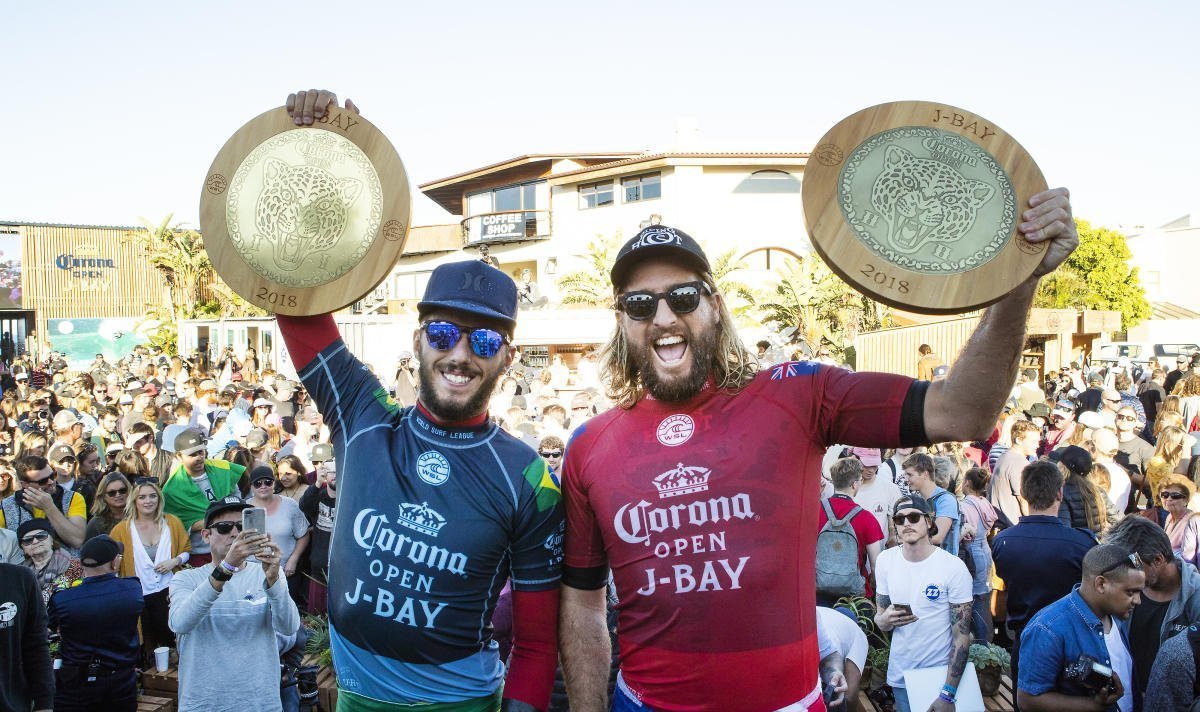 We’ve already established in 2017 that the kid was no joke at South Africa’s most (in)famous pointbreak when he redefined surfing the long majestic walls at Jeffrey’s Bay. What’s a joke though is how impressive his back to back win this year was. One word. DOMINATION. Toledo’s worst 2018 J-Bay heat was a 13.83 in Round 1.

A number, Michael February, and Kelly ‘The GOAT’ Slater haven’t been able to achieve all season. Round 3, Round 4 and the Semis was basically a walkthrough for the man sitting atop the Jeep Leaderboard, and the 8.5 in the Final was video game material, slicing & dicing, hacking & cutting his way to a second win of the season.

The Style Master’s One Last Hooray

It wasn’t really the happy ending I was personally hoping for. Sure, Round 4 isn’t bad, but Parko would have deserved one last hail mary at a wave that suits his style so perfectly. Parko’s early exit means that he is officially joining the club of retirees, trading post head interview close-ups for family sightseeing-trip selfies and early workouts for late pub crawls.

With Parko watching the Facebook Live streams, yelling, shouting and cursing at the Zuckerberg x WSL quality faux pax for the remainder of the season, the art of style has vanished from the dream tour too. Parko was the last standing member of a tribe of true style masters,  drawing lines, so flawless and precise, nobody from the new guard seems to be able to match. It’s an art that unfortunately has lost significance in the modern era of surfing, but with Parko gone, it is now a relic of its time – more beautiful than ever.

The Queen Of Surfing

World order is restored. The queen is back, and she looks mighty fine in yellow. Miss Gilmore is in a league of her own this season. The ever graceful 6-time world champ dominated the long right walls of Jeffrey’s Bay and didn’t give up a single heat on her quest to victory. Steph is sitting comfortably at the top of the women’s ranking and with only four events to go, it is safe to say that the likes of Lakey P, Tati Weston – Webb, and all the others are starting to feel the heat right about now.

The Best Of The Rest

Leading the charge is Kanoa Igarashi. After a somewhat disappointing start to the season, Igarashi was ready to play in South Africa.  The kid from the land of the rising sun was on a tear throughout the event but saw his run for victory come to an end when he found himself in combo-land against Filipe Toledo in the semifinal.

He might not have gone home with the 100k paycheck, but he can claim honorable mention for “best wave ridden”.  His 9.67 rail-turn to bottom-turn to fin-throw-reverse combo in the Quarters was the most beautiful thing I’ve seen at J-Bay since Jordy’s 10-point barrel back in 2017. Kanoa is clutch and deserves to be on tour.

Another guy who deserves to be rubbing shoulders with the best is Wade Carmichael. The rookie isn’t flashy nor is he particularly exciting to watch, but he is incredibly effective. He might lack entertainment value, but he makes more than up for it with sheer power and drive which he demonstrated in the battle of the big guys, taking out South Africa’s poster boy Jordi Smith in the Semis.

Currently sitting just outside the Top 5, can we crown him Rookie Of The Year already?! Rookies and wildcards have been impressive this season, and JBay is no exception. Despite his Round 3 exit, Mikey Wright already looks like a seasoned vet and most likely will make the leap from the WQS to WCT next year. Another wildcard shaking things up was Bianca Buitendag. On her home turf, the cool, calm and collected goofy-footer made it all the way to the semifinal, sending Carissa Moore and Coco Ho packing early in the process.

Thumbs down of the event

There weren’t too many moments. The waves were pumping, and the boys and girls were ripping. A semi-thumps down for Italo Ferreira’s Round 2 bye bye or perhaps Carissa’s Round 3 exit but nothing really too crazy in comparison to the latest Facebook blunder. Heavily publicized and overhyped, the new Livestream failed miserably. Not sure who thought cute emojis, thumbs up/down and live questions would be a good idea but please WSL, drop Zuckerberg from your payroll already.