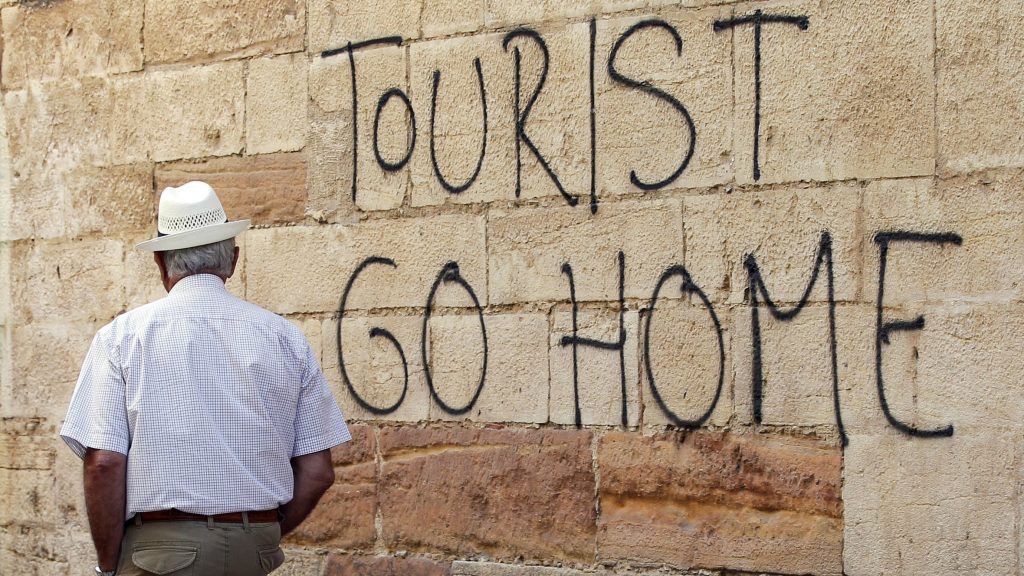 It has been the European buzz phrase this summer. Actually last summer, and the summer before that too, but the warm welcoming for visitors has turned from a wild love affair into an ugly divorce in 2018. European holiday destinations have made billions from tourists but are now blaming and shaming them for social issues that aren’t always related to selfie sticks, sunburns and hop on, hop off bus tours.

I’m torn. A part of me agrees with the argument that today’s model of tourism ousts people from their neighborhoods — from homes they lived in their whole lives, simply because they can’t afford the cost of living any longer.

I can understand that there’s resentment over tourism because apartment prices skyrocketed in recent years, and as a result, has increased the cost of living for locals. I can appreciate that no one wants to live next door to an Airbnb rental filled with uneducated foreign fucktards not knowing how to behave and I get that mass tourism is a curse and needs to be regulated.

I get all of that because I experience it first hand, both as a tourist and as a local.

My girlfriend comes from a small autonomous region in Spain. Born and bred in a city famous for its food, culture, and language. Her whole family still lives here and probably won’t leave any time soon — if ever. While the region is rugged and wet in winter, it is definitely paradise-postcard material in Summer. The days are long, the beaches clean, the city just beautiful, and while we don’t reside here permanently, we love to spend our summers here — along with a gazillion of other outsiders. I see first hand what the influx of tourists does to a city where the cost of living went through the roof over the last 5 years — so much so, that young people need to move back in with their parents or even worse, move away from a place they called home since the diaper years. It creates tension. It puts a strain on relationships with people not from the area, and as a foreigner you are definitely treated differently. The treatment isn’t bad, rude or derogatory, but it is different.

I truly sympathize with people living in a place that is invaded by tourism but nonetheless, the other side of me wants to tell all these ignorant fucks to shut up already. It’s pathetic. It’s petty, and the argument people vandalize properties for is incoherent, incorrect and incomplete.

I mean, you are over tourism because it messes up living in a place you love — I get that. But destroying assets of your beloved city to voice your displeasure is just a contradicting act of stupidity, and there’s no argument there. All these people need to have a long hard look in the mirror before they again march the streets with those pretty made-up banners and the made in China megaphones because the real enemy isn’t tourism and the real victim isn’t (always) them.

Of course, this is an oversimplification of the issue but just to put it into perspective. The other day I walked past a bar that’s pretty well known among foreigners. It had a sign out the front that said: “Basque Sangria Sold Here.” Now, there’s nothing wrong with Sangria sold anywhere — it’s freaking delicious. However, there’s no such thing as Basque Sangria! Sure, Sangria has its humble roots in Spain but has nothing to do with the Basque Country. Its sole purpose is to bring (foreign) people in, give them a taste of “culture” they are familiar with and in return squeeze a few hard-earned euros out of them. Capitalism 101. An economic and political system that’s particularly bearing fruit in a country like Spain where tourism makes up 12 percent of the country’s economy. A number that is only going to rise in the future due to the economic value tourism has to destinations like Barcelona, Majorca, San Sebastian, Venice, Rome or Dubrovnik.

So if you want to keep blaming and shaming — fine, go ahead, but at least make sure you are pointing fingers in the right direction.

The problem, however, goes far beyond the invasion of vacationers and the implications it might have. The protests are often fuelled by politics rather than economic issues. It is no coincidence that Catalunya and the Basque Country are the biggest campaigners against tourism. Of course, there is resentment over the inflated cost of living, but in both regions, anti-tourism campaigns are undoubtedly colored by nationalism. Both, the Catalans and Basque, have a long history of struggle against Spanish political domination and this isn’t so much a fight against tourism but a fight against the system. The #touristgohome movement is more a medium to assert national identity and reject globalization rather than a battle against mass tourism and higher living costs.

In my books, it’s a straight-up cop out. It’s a cowardly act of fighting for a cause without having the balls to face the problems head-on. People having a problem with Spanish oppression — that’s one thing, people voicing its desire to seek independence from a notoriously corrupt and unfit government is fine by me too, but scapegoating tourists, making them responsible for the internal struggles is irrational and ignorant.

I don’t care if you are anti-capitalism and you want to destroy the system, but I care if your protests turn into violence, vandalism, and racism all in the name of “self-defense.” And if you think that’s the way to work towards a common goal, then you are a patriotic dumbass and should be sent to fucking Mars — One Way Ticket Only!!